Just One Touch of His Hem

If you missed our worship service on June 9, you missed an inspirational interpretive dance of the song entitled "One Touch."    You can find it on YouTube at

http://www.youtube.com/watch?v=slixOo1yh_E&feature=youtu.be '
The song illustrates the Biblical story of a sick, anonymous woman who suffered from an issue of blood for twelve years, which rendered her legally unclean.  She wanted to be healed.  She desired to throw herself at the feet of Christ and tell Him what she needed.   However, because she was deemed "unclean" and because of the crowd surrounding Jesus as He was walking by her, close contact with Him was almost impossible.  Therefore, desperate to be healed, she pressed in and hoped that, without being noticed, she might simply touch the hem of His garment. Who was this woman with such a powerful faith?

As soon as she touched the hem of His garment, she was healed.   When the woman touched Christ’s garment, He felt that “virtue had gone out of Him.”   He turned around and asked, “Who touched me?” The disciples were surprised at Jesus asking such a question, given the crowd of people that day.  It was no surprise that her touch went unnoticed by most everyone else.  After all, she was one of many who touched the Master that day as he walked down the street.  The difference was this:
one touch of faith could not be hidden from Him.

A strength she had not known for 12 years renewed her physical body... and she knew that it was Christ who had made her well.

The crowd who listened to her confess to Jesus that it was she who touched Him also heard the Savior say,  "Daughter, your faith has saved you...  go in peace.”

What aspect of your life troubles you today?  Perhaps you've been ill for quite a long time, as the lady in this story had been.  Maybe you're experiencing unhappiness in your marriage or strife within your relationship with a friend or family member.  Could it be that financially, you are experiencing difficulty?  Whatever it is in your life that overwhelms you, just one touch from your Savior could change your circumstances... maybe even change your life forever.   Press in...don't be shy... don't worry about others... Don't worry about your illness... Reach out and with just ONE TOUCH, invite the Master to heal you!

New International Version (NIV)
20 Just then a woman who had been subject to bleeding for twelve years came up behind him and
touched the edge of his cloak. 21 She said to herself, “If I only touch his cloak, I will be healed.”
22 Jesus turned and saw her. “Take heart, daughter,” he said,“your faith has healed you.” And the
woman was healed at that moment.
Touch His Hem for what you need today!
~Kay Dillard

Ever been there?  Join me this Sunday morning as we explore God's Word on the matter in a sermon called "Bad Advice."  Want to read ahead?  Check out 1 Kings 12 and 13!

What Praise or Worship song has touched your life dramatically? One song that has recently made a difference in my life is "Worn" by Tenth Avenue North. If you haven't heard it, listen to it and let me know what you think.

What song has been inspirational to you lately? I'm looking forward to reading your posts! 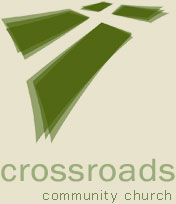 We welcome you to visit Crossroads Community Church in Athens, GA this coming Sunday.  It's FATHERS DAY and we will be recognizing all Fathers.

In addition, we have a special speaker, Bob Armstrong, who will be delivering the message.

As always, Pastor Chris Bailey and our Praise Team will lead us in worship with amazingly inspirational contemporary music.

For further information, visit www.crossroadsathens.com, email us at crossroadschurchoffice@charter.net or call our church office at 706-543-4650.

We hope to see you Sunday!  Come as you are.
~ Kay Dillard


Posted by Crossroads Community Church at 10:30 AM No comments:

Email ThisBlogThis!Share to TwitterShare to FacebookShare to Pinterest
Hello, everyone!

This is the NEW blog for Crossroads Community Church in Athens, GA.

We'd love to let everyone know that we are having Vacation Bible School this week and YOU are invited to come!  The flyer below gives you the information you need.

Posted by Crossroads Community Church at 9:19 AM No comments: